A significant winter storm is heading our way later this weekend.

“We are expecting 6-10 inches of snow for the Butler area from this particular storm. It’s going to arrive as we go through the late afternoon and evening Sunday. The heaviest of the snow is going to be during the overnight and the early morning hours of Monday where the snow could potentially fall at one inch per hour,” Porter said.

Porter said that there is a chance that the storms tracks differently over the next 48 hours, but modeling data shows it starting to solidify a path.

“The storm track on this is going to be critical. We know with these types of storm systems, even a 50 mile adjustment either west or east can make a big difference in where we expect the heaviest of the snow to setup.”

As to what type of snow to expect, Porter explains.

“This looks like it should be a pretty fluffy snow just because the air mass is going to be so cold just in advance of the storm. In fact, AccuWeather is forecasting a projected low around 10 degrees Saturday night. That gives you a sense of how chilly its going to be as a fresh surge of cold air arrives from the north.”

Porter encourages you to download the AccuWeather App to stay up to date, and we’ll bring you coverage all weekend here on the Butler Radio Network. 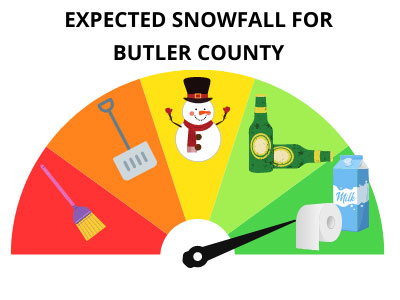 The Butler Radio Network is forecasting this as a bread, milk, and toilet paper snowfall.